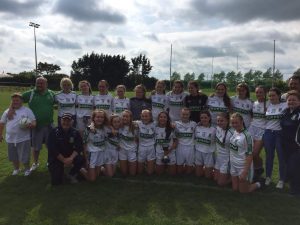 On a warm summer’s day in Hawkfield Moorefield and Rathangan served up a
terrific game of football that was entertaining up until the very last. The action
commenced right from the throw-in, when Niamh McFadden tapped the ball
down to Charlie Horgan who went on a blistering run through the centre. Her
pass found full forward Sian Mullins who finished off the move with
Moorefield’s first point of the afternoon. Straight from the kickout, Rathangan
broke up the pitch and won a free in front of the posts. The very accurate
Aisling McMullen stepped up to slot it over the bar and bring the teams level. It
was a very exciting first half of football, with both teams trading several points
early on. Rathangan pulled ahead with a point from Katie Donegan, only to
have it cancelled out at the other end by a fine effort from Clodagh Murphy.
The quick movement up front of Ava McEvoy and McMullen was causing the
Moorefield defence all sorts of bother, and Rathangan won another free ably
pointed by McMullen. The Rathangan defence were performing strongly down
the other end, with some important interventions coming from Faye
O’Loughlin. However, that didn’t stop the Moorefield forwards from adding on
two more points, one from Jasmine Breen and Sian Mullins getting her second.
Rathangan then struck gold on 18mins with the first goal of the game. After a
brilliant team move it was sent crashing into the net by full forward Ava
McEvoy. Moorefield hit back with a pointed free from Kim Morrisey, but the
impact of this was immediately snuffed out with another cracking goal from
Rathangan. This one came from Aisling McMullen, finishing into the bottom
corner just out of reach of Moorefield ‘keeper Niamh Conaty. The team
response from Moorefield was excellent, with Erin Shelley making some
fantastic intercepts and delivering nice ball into the forwards. The Rathangan
defence were under pressure and this began to tell when Moorefield hit four
points without reply, three frees from the boot of Clodagh Murphy and
another Morrisey point, bringing the sides level once again. However,
Rathangan were to have the better of the first half, with some fine work from

Katie O’Loughlin in midfield leading to another McEvoy point to put them one
ahead at the break.
Moorefield started the second half at a blistering pace, hitting for their first
goal after just three minutes. Horgan made another great run through the
centre and dispatched it to the back of the net herself. This was quickly
followed by another from Molly Dervan, dancing around her player before
finishing past Rathangan ‘keeper Ella Byrne. Rathangan were struggling to get
their players on the ball, with another of their kickouts being won by
Moorefield captain Sinead Cassidy who made a powerful run before passing to
Dervan and eventually the ball was pointed by Holly O’Raw. Rathangan were
not out of this game yet, however. After some brilliant defending from Aislinn
Brady O’Toole, the ball was eventually won by Katie O’Loughlin who skilfully
finished to the back of the net. Moorefield hit back with a goal of their own
only a minute later, Molly Dervan making a strong run up the wing to put
through Jasmine Breen, who rounded the ‘keeper and rolled it into the net.
Moorefield were beginning to get on top at this stage, with Anna Brassil, Amy
Price and the excellent Erin Shelley holding the fort at the back. Nicole Quinn
and Niamh McFadden were working hard out the field. This paid off with
Moorefield hitting three goals in quick succession, Dervan getting in for her
second of the game with the other two coming from the boot of Kim
Morrissey. Substitute Isobel Landy made an immediate impact with a nice
point from play. The Rathangan defence was working extremely hard, led by
Faye O’Loughlin and captain Sarah Fitzsimmons. However, another pointed
free from Charlie Horgan and a Morrissey point straight from the kick out
meant the way back was looking ever more difficult for Rathangan. To their
immense credit, the Rathangan girls never gave up and an initial good save
from Conaty was eventually bundled into the net by the ever-threatening
McEvoy. This was followed up minutes later with another goal from Aisling
McMullen. The final few minutes of the game were end to end, with
Moorefield registering the final score, a high ball from Landy dropping into the
back of the net. This was a thoroughly entertaining game of football, with a
feast of goals for the spectators to admire. Both teams contributed to an
engrossing contest, with Moorefield coming out on top in the second half. Best
for Moorefield were Anna Brassil and Erin Shelley in defence, the two
midfielders Horgan and McFadden, with Nicole Quinn, Dervan and Morrissey
hitting form up front. Best for Rathangan were Katie O’Loughlin, Ava McEvoy
and Aisling McMullen. Final score Moorefield 7-13 Rathangan 5-4.

Thanks to Joe Monaghan Catering Services for Sponsoring the food for the Under-16 team after their match today. It’s much appreciated!

Well done to our Under-16 Girls Football team and management who won their semi-final this morning.

This entry was posted in News Feed, Under 16. Bookmark the permalink.