Photographs from the Under-15 final

Thanks to Catherine Conaty for her report from last Mondays final.

Moorefield U15s were delighted to be in Hawkfield on Monday 30th October for a division 5 county final against Leixlip 2. While Moorefield had finished top of their division and gone on to defeat Suncroft in the semi-final, they were under no allusions that this final would be an easy battle. However, it being the first final for this group of players to contest they were up for the challenge and were out to enjoy the game no matter what. The weather conditions were good, it was a bright dry afternoon with a slight breeze from right to left across the pitches. However, to coin the cliché, it was indeed to be a game of two halves.
Moorefield started off the game at the faster pace with Charlie Horgan winning the throw in and getting the ball in to Sian Mullins who was unlucky not to finish with a score. Moorefield were, however, first on the score board shortly after this when Clodagh Murphy received a side-line ball from Erin Shelley and took her first point of the game. Kim Morrissey was unlucky not to score within minutes when her free kick dropped short. Leixlip were quick to respond and cleared the ball quickly out of danger and were awarded a free for their efforts. Moorefield’s Lucy Cummins was quick to react and managed to get the ball up to the Moorefield forwards again. There was a lot of back and forth play for the next 5-10 minutes with both teams trying hard to get their scores. Moorefield were put under pressure from Leixlip, with their goalkeeper Niamh Conaty and backs Sinead Cassdiy, Aisling Brady O’Toole, Lucy Cummins and Erin Shelley working hard to keep the Leixlip forwards Chrystella Kanda, Dearbhla Darcy and Katelyn Darcy from converting their numerous efforts. From this point onwards until the halftime whistle was blown it was all Moorefield, scoring 5 goals and 8 points without reply. Tremendous play from midfielders Charlie Horgan and Niamh McFadden and captain and centre forward Chelsea Horgan winning the kick-outs in the middle of the park and finding their forwards Clodagh Murphy, Isobel Landy, Kim Morrissey and Molly Dervan who converted all their efforts without mistakes. While the half time score was Moorefield 5-09 to Leixlip2 0-00, this does not reflect the fast pace that this half was played at and Leixlip were very unlucky not to have numerous scores on the board.
Leixlip won the throw in and the Moorefield defence were under pressure from the start, however, a great clearance by Aisling Brady O’Toole sent the ball right back down to the Moorefield forwards where Molly Dervan once again found the net. Moorefield went on to score two more points without reply before Leixlip decided to take control of the game in the middle of the field and their never give up attitude and sheer determination sent them on a scoring spree of their own. They scored 3-04 in the final 20 minutes of the game with some excellent passages of play right from their defence of Shauna Long, Emily Gorecka and Beatrice Cocojaru, to mention but a few, through to their midfield of Sion O Gorman and Rachel Ibrahim to find the forwards Chrystella Kanda, Katelyn Gallagher and Kayleigh O Neill who scored a goal and a point each. There was however, some fine defensive performances put in by Moorefield during this time with Amy Price, Nicole Quinn, Kayla Leahy and Sinead Cassidy all contributing to preventing Leixlip narrowing the gap. Also, the never give up attitude of Erin Shelley with midfielders Charlie Horgan and Niamh McFadden and the contributions of substitute forwards Tara Shelley and Phoebe Landy led to Moorefield adding to their tally with yet another goal and a point from Kim Morrissey. Final score was Moorefield 7-12 to Leixlip2 3-04.
Moorefield: Niamh Conaty, Nicole Quinn, Aisling Brady O’Toole, Lucy Cummins, Amy Price, Sinead Cassidy, Erin Shelley, Charlie Horgan, Niamh McFadden, Kim Morrissey (3-04), Chelsea Horgan, Clodagh Murphy (1-05), Isobel Landy (1-01), Sian Mullins (0-01), Molly Dervan (2-01), Anna Brassil, Mia Dobbyn, Kayla Leahy, Aoife McMullen, Tara Shelley and Phoebe Landy.
Leixlip2: Aisling Kelly, Shauna Long, Emily Gorecka, Shauna Mooney, Beatrice Breascu Cocojaru, Caitlin Devit, Jodie Grange, Sion O Gorman, Rachel Ibrahim, Chrystella Kanda(1-01), Dearbhla Darcy (0-01), Dervilla Nallen, Ailbhe Harrington, Katelyn Gallagher (1-01), Kayleigh O Neill (1-01), Roisin Duggan, Mia Casteniera, Margaret Lynch, Carla O Dwyer, Sophie Baxter, Anna Bradley, Kelly Smith, Emily Smith, Megan Travers, Annamay Fagan, Alannah Hudson. 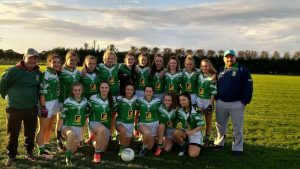 Our Under-15 team train on Tuesdays and Thursdays, 7- 8.30pm. New players are welcome.

This entry was posted in Under 15. Bookmark the permalink.