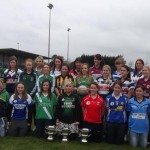 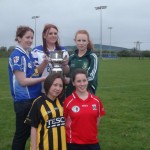 Rheban vs. Moorefield (Called Off)

In this round five clash of the Div. 4 Junior League Moorefield where home to Round Towers. Moorefield were first on the scoreboard within minutes of the throw in with a point ably put between the posts by Dearbhail Kelly. Aisling Curley got her first of the evening within minutes followed by another from Kelly. Towers being three points down were now beginning to pile on the pressure and were awarded a free for their efforts to get their first score of the game from their half forward, they followed shortly with another point from play. Moorefield’s Eliza Kelly got the first goal of the game mid-way through the first half, however, Towers retaliated with a goal of their own within minutes. The first half finished out with scores from placed balls: Moorefield’s Dearbhail Kelly getting two points from frees and Ciara Conaty a goal from the penalty spot, while Towers got two points from frees and one from play as well a goal from the penalty spot. Half time score was Moorefield 2-5 to Towers 2-5.

The second half started with a flurry of points from Moorefield’s Dearbhail Kelly and Aisling Curley before Towers were awarded their second penalty of the game which they put away nicely. This spurred Moorefield on and Fionnuala Kelly replied within minutes with a fine goal, followed in quick succession with three points from Dearbhail Kelly. Towers got another goal which kept them in the game, however, Moorefield were not phased and upped their game at this point. Great defending from Amber Masterson and Ciara Cusick ensured the supply of good ball to the midfielders Ciara Conaty and Shauna Doyle was plentiful. The forwards showed some great skill and determination and were duly rewarded with points a plenty from Dearbhail Kelly, Eliza Kelly and Fionnuala Kelly as well as two more goals from Aisling Curley. Emma Curley and Demelza Callaghan battled hard in the forwards to win balls and were a major contribution to many of these scores. The Moorefield keeper Laura Hannon and full backs Niamh McMullen and Fionnuala Kelly were in fine form in the latter stages of the second half and only allowed Towers to add two more scores to their tally, a fine point from Jackie Kelly followed in quick succession with a goal form Towers half forward. However, these scores were little consolation at this stage. Moorefield ran out clear winners with the full time score of 5-19 to 5-6.

Best for Moorefield was top scorer Dearbhail Kelly who certainly brought along her scoring boots, Shauna Doyle in the mid-field who covered every blade of grass and Ciara Cusick in the backs who attacked and won every ball that came her way.

Round Towers vs. Moorefield

This entry was posted in Senior League. Bookmark the permalink.