Meet the Under 9 Girls Football Team 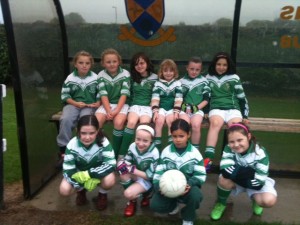 This U9 team are a great bunch of footballers. They played in two blitzes this October and won all three matches at both. The first was played on a very wet Saturday morning in Raheens GAA Club in Caragh: Moorefield played against Raheens, Ballykelly and Monasterevin and despite the dreadful conditions they played some very skillful football and they were duly rewarded afterwards with treats in the clubhouse. The second blitz was held in Suncroft and the conditions were much better: Moorefield played against Suncroft, Sarsfields and Ballykelly and again some fine displays of football were on offer. Even though these girls are very young they have great ability and they will definitely entertain us in the future, watch out!

The parents are great supporters of this team so a big shout out to them also.

This entry was posted in Under 8, Under 9. Bookmark the permalink.