The U11 team for Autumn 2011 are an energetic and very enthusiastic bunch of girls all of which have great footballing ability. They are playing in a non-competitive league this Autumn with rules similar to the Cumann na mBunscoil rules, the girls are very familiar with these as they all play with their schools. They have played Ballykelly, Monasterevin, Naas, Ellistown and Robert Emmetts so far and will play Milltown also. They have improved no end since their first outing against Naas and have given all their supporters excellent displays of football despite some of the weather conditions. The team are Marie Gray, Caoimhe Martin, Chloe Pearson, Ciara Regan, Zara Kearney, Charlene Dowling, Leah Delaney, Kate Hamilton, Hannah Rasmussen, Amelia Hennigan, Megan Masterson, Natalie McSorley, Seoda Smyth, Ellen Clare, Sarah Murray, Lauren Eastley, Abbie Joyce-Bowles, Amy Harte and Sarah Edge. 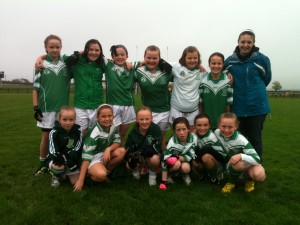 This entry was posted in Features, Under 11. Bookmark the permalink.