Following a disappointing result but having delivered a very strong performance in the recent Leinster Semi Final v Laois losing by a point with the latter going onto win a Leinster title by the same margin this weekend. The Kildare girls embark on the next round of their 2011 journey in the All Ireland Qualifiers, it certainly doesn’t get any easier though having drawn the current Champions Dublin in Pearse Park Longford on Saturday 23rd July.

The Leinster Semi was quickly followed by the last round of club league games and the subsequent club league semi finals. Unfortunately these games have thrown up a number of serious injuries which may force several changes upon the management team from the original Laois line up. However these issues have generated opportunities for other panel members and all involved have knuckled down well and maintained focus on the All Ireland Qualifier outing for this Saturday 23rd July and putting in a performance level that will deliver the result we know we are capable of getting on our day.

The game is being televised on TG4 with a 5.15pm throw in 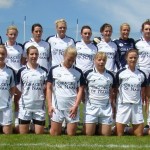 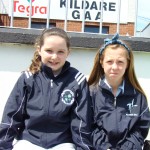 Hard luck to Dearbháil Kelly and the Senior Kildare Footballers who lost against Laois in the first round of the Leinster Championship. The girls now take on Dublin in the qualifiers.

Well done to Zara Kearney and Niamh Conaty who were mascots on the day.

TG4 Leinster senior semi-final
Kildare 1-13 Laois 0-17
By Jackie Whelan
Losing by a point is always tough on a team and leaves everyone thinking of what might have been. The clash of Kildare and Laois has been an eagerly awaited encounter ever since the first round of the Bord Gais Energy league back in February when Kildare pulled off a fine win. Since that victory Laois went on to reach the league final and Kildare were unlucky to narrowly miss out on a semi-final spot.
When championship fever hit St. Conleths Park, league form went out the window and the 60 minutes of football was the most important thing for both teams. The pitch was in great condition and spectators were provided with one of the hottest days of the year. The scene was set for what turned out to be a great game of football played at a blistering pace with two extremely fit physical teams.
Martina Dunne opened the scoring for Laois inside the first minute quickly followed by a Mary Kirwan point. Kildare showed signs of nerves early on in the game and saw two shots sail wide. It was wing-forward Tracy Noone who got Kildare opening score on 7 minutes. This immediately settled Kildare and some great attacking play saw Aisling Holton add a great point followed by a well taken goal by Deirdre Gately. The Kildare girls were well on top all over the field at this point. Laois struggled to get through a solid Kildare defence and Aishling Savage notably was in top form in the full back position.  Martina Dunne managed to weave through the defence on 12 minutes to add her second point of the game. A minute later Tracy Noone added her second of the afternoon also. Tracey Lawlor scored her first point of the day from a well taken free on 17 minutes. Kildare won possession from the kick out and Na Fiannas Stacey Cannon scored a great point for the home side. Laois added another through St Leos star Sinead Doogue on 20 minutes. This was to be their last score of the first half. Kildare added a further 2 points through Noone (free) and Earley (28 mins). Half time score Kildare 1-6 Laois 0-5.
Laois came on to the field for the second half as a much changed team and from the off found themselves being awarded a penalty inside the opening seconds. Sinead Doogue stepped up to take it and blasted it over the bar. Aine Gately won some great possession throughout the game but in the 32nd minute, she added 2 points (1 free). Laois answered immediately a minute later with 2 quick points from Martina Dunne and Grace Weston. Laois began to run at the Kildare defence and were rewarded for their efforts with points from Angela Casey, Lawlor and Dunne. This left just one point between the sides with 8 minutes of the second half played. Noelle Earley worked hard to break down the Laois defence and with the slightest of openings blasted the ball over the bar but perhaps was unlucky for this not to find its way under the cross bar. Tracey Lawlor began to dominate the midfield and half forward areas of the field and added 2 further points to her tally (40 and 42 mins). Kildare seemed to struggle to move the ball to the forward line and scores were difficult to come by. Stacey Cannon added her second point of the afternoon for Kildare (44 mins) but Lawlor stepped up again for Laois a minute later. Catherine O’ Malley was introduced to the Kildare attack and made an immediate impact adding a point. Laois seemed to have the ability to move the ball quicker up the field and added 2 further points through Lawlor and Dunne. This gave Laois a 2 point advantage in to the final 10 minutes. Cannon narrowed the gap to the minimum on 53 minutes but the on form Lawlor cancelled it out with a fine point on 54 minutes. Aine Gately scored Kildares final score of the game on 58 minutes. Unfortunately for the Kildare girls when the final whistle blew, the bare minimum was between the sides.
This was a spirited Kildare display from start to finish. There were chances early in the first half which were not capitalised on and between that and some soft frees awarded in an already physical game; the lilywhites are left wondering what might have been. Tracey Lawlor was as impressive as always and scored a personal tally of 0-7. Next up for Laois is a Leinster final spot against Meath and Kildare await the qualifier draw which will be made in Croke Park on Tuesday evening.
Kildare team: Emma Byrne, Trish Delahunt, Aishling Savage, Denise Tierney, Kate Leahy, Aisling Holton (0-1), Donna Berry, Brianne Leahy, Joanna Timmins, Tracey Noone (0-3), Aine Gately (0-3), Deirdre Gately (1-0), Noelle Earley (0-2), Stacey Cannon (0-3), Maria Moolick. Subs: Niamh Quinn for K Leahy (19 mins), Catherine O’Malley (0-1) for T Noone (46 mins), Mary Hulgraine for D Gately (55 mins).
Laois team: Ciamh Dollard, Laura Hyland, Grainne Dunne, Ellen Healy, Alison Taylor, Jane Moore, Mags McEvoy, Angela Casey (0-1), Tracey Lawlor (0-7), Mary Kirwan (0-1), Anna Moore, Martina Dunne (0-5), Martha Kirwan, Sinead Doogue (0-2), Grace Weston (0-1).

Laois and Kildare will contest the second TG4 Leinster Senior championship semi final, the last time both counties went head to head in a Leinster semi final was back in 2009, on that occasion the Lillies came out on top with a six point winning margin to book their place in the final against Dublin. The Dubs handed out a heavy defeat to Meath in their semi final clash, and were in a similar mood then they came up against Kildare in the 2009 final, running out comfortable winners with eleven points to spare.

That was then, this weekend Laois travel to St. Conleth GAA club, County Kildare, to take on the home side in what will be an exciting encounter. Referee Keith Tighe (Dublin) will get this under way at 2pm. The O’Moore County who lost out to Cork in this years Bord Gais Energy div. 1 NFL final will be a stern test for Kildare at this level, but based on their recent league performances there is not a great divide between the sides, a quick glance at the league stats, will reveal that the Laois defence conceded 107 points while Kildare shipped 132, however the Kildare forwards had a better return notching up 116 points compared to 102 for Laois.

On Sunday next both counties start with a clean sheet, the prize will be a place in the TG4 Leinster senior championship final, to face either Dublin or Meath. I am sure The result of that semi final game will be winging its way along the wires to the Kildare venue to add to the excitement long before Keith Tighe blows full time.