Hawkfield was a busy hive of activity yesterday morning as the future stars of Kildare ladies GAA participated in the club u12 blitz. 12 clubs were in attendance boasting 14 teams all with eager young girls ready to play football.
Despite the delay in putting goals together and setting up pitches and with the inclement weather conditions it did not deter the girls by any means. with the full use of all Hawkfields pitches the clubs were divided into groups of 4 and all were allocated a pitch with match timetable. Each club played 3 games of 15 -20 mins each half with a 5 min interval between halfs.
The football on display from all the girls/teams was excellent and great credit to not only the girls but to the clubs and team mentors for all their hard work in having the standard so high.
A big thank you to the parents that came to support their teams and also to the clubs that supplied the referees for without them games would not have been played. Thanks to Donal and Terry along with the other gentlemen that helped carry move put together goals and set up pitches and to those that helped coordinate the games on the respective pitches.
Overall the day was a success and the girls enjoyed it and it gave them a taste of playing football in a format they would not be used to.
The disappointing aspect of the occasion was that only 12 clubs took part which is less than half the amount of clubs in the county that boast underage teams.
Thanks to Damian our county development officer for organising the blitz and for his continued hard work for the development of the ladies game in Kildare.
Participating clubs were Moorefield, Leixlip (2teams), Carbury (2teams), Milltown, Raheens, Suncroft, Robert Emmetts, Eadestown, Round Towers, Castlemitchell, Kilcullen and Ellistown. 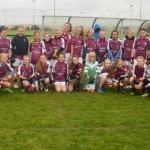 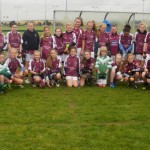 This entry was posted in Under 12. Bookmark the permalink.