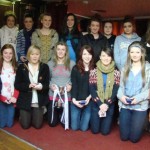 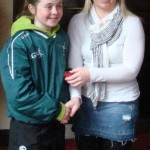 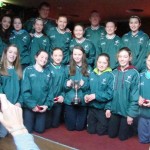 Carrie Pedley and Kate Hannon Under 12

Kildare Ladies Football held their 2011 Juvenile Presentations today, Sunday 11 Dec in Judge Roy Beans, Newbridge in a dry function Room. Central Council Delegate, Christy Horan, was once again the accomplished MC with new County Board Secretary Kathleen Moolick ably assisted in the running of the event by her predecessor Bernadine O’Hara, Janet Keoghegan and the various teams managements while new County Board Chairperson Arthur Corrigan oversaw the whole event. Also in attendance were new County Board Officers, Treasurer Sharon Dooley and Registrar Gillian Dunne. On hand to present the medals were County Senior Captain Donna Berry, Vice-Captain Maria Moolick and All Star Nominee Aisling Holton. The presentation of medals were to the Under 16 Team who got their Leinster Runners Up and All Ireland Shield Winners medals,the Under 14 team who were presented with their Leinster A Championship Runners Up Medals and at Under 12 one team got the Leinster Blits Div 1 Winners and another Under 12 team the Leinster Blitz Div 4 Runners Up Medals. There were Players of the Year Awards at Under 16, Under 14 where there were joint winners and at Under 12 where there were awards for a player from each of the 3 teams Kildare fielder Under 16 Player of the Year: Becky McGuirk, Suncroft Under 14 Players of the Year: Caoimhe Jameson Eadestown and Emma Lyons Sarsfields, Under 12 Players of the Year Rebecca Brereton St Kevins, Savanna Fisher Ballymore Eustace, Aoife Walsh Maynooth. There was also a Kildare Ladies Football Award to Senior Player of the Year Maria Moolick, Leixlip and this was presented to Maria by County Chairpersonn Arthur Corrigan.

Congratulations to the Moorefield girls Ciara Conaty, Carrie Pedley and Kate Hannon who received their county medals on the night.